Do Solar Panels Work At Night and on Cloudy Days?

Do Solar Panels Work At Night and on Cloudy Days?

Solar panels, also known as photovoltaic (PV) panels, transform light from the sun, which is made up of energy particles called "photons," into electricity that can fuel electrical loads. Solar panels absorb and transform clean renewable energy in the form of sunlight into electricity. 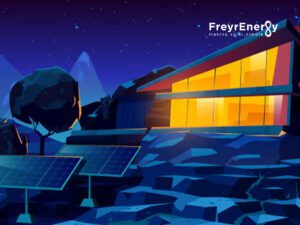 This complete procedure is the Photovoltaic Effect. An average home has generally enough roof space to accommodate the number of solar panels needed to meet the home's entire energy needs. Excess energy can be fed into the main power grid, via net meter. In case the system is not connected to a grid, excess electricity produced during the day can be stored in batteries and used at night.

How Effective are Solar Panels in Winter and on Cloudy Days?

Solar panels do not function in the dark because they need sunlight to produce energy. On the other hand, on cloudy days; they produce power, just don't perform as well as they would on a sunny day. Solar panels may produce about 10% – 25% of their daily power production on a cloudy day depending on the sunlight captured by the panels.

Net metering is one of the most important reasons why home solar panel systems are a successful investment. During the day, your panels may generate more electricity than you need (especially during the hot summer months). With net metering excess electricity produced can be exported to the grid. The units of electricity consumed are adjusted against the units exported and the consumer avails an equivalent reduction in their electricity bill.. And if need be, when there is no energy generated, such as at night, net meters can import energy from the grid to power various loads in the house.

Solar panels will not generate maximum electricity if the sun is blocked by clouds, and they will definitely not produce electricity if there is no sunlight available such as at night. When contemplating a solar installation, the trick is to plan ahead. That's where Freyr Energy will assist you in making the transition to solar energy as hassle-free as possible. From pre-sale to post-installation, Freyr Energy guarantees information transparency and a seamless experience. Freyr Energy only offers the highest-quality solar installations. Solar energy has been harnessed by homeowners all over the country, resulting in significant monthly savings on electricity bills. Customers have recorded savings of up to 90% on their electricity bills after installing solar systems.