In rooftop solar solutions, solar panels are placed on the roof of commercial, industrial or residential buildings to power various loads. Rooftop solar can be broadly classified into 2 different categories. On-grid systems, where the excess electricity generated is connected to the grid and off-grid systems where the excess electricity is stored in batteries. In India, depending on the state and the customer’s connection type, the metering available to you might be Net Metering or Gross-Metering. 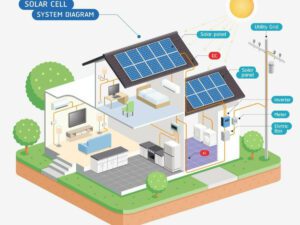 Consumers utilize the power generated by the solar panels and surplus power is exported back to the grid. In case the customer needs power, when the solar system is not producing energy, such as at night, the customer can import power from the grid. In net metering, a bidirectional meter is used to calculate the total power exported and the total power imported by the consumer.

Let us consider for e.g, a customer is consuming 750 units per month and paying an electricity bill of INR 6750 at a tariff of Rs. 9 per unit. If the customer installs a 6kW system, the system will generate an average of 720 units per month.

After transitioning to solar, the customer will save his power bill on the 720 units being generated i.e., INR 6480 (720units X Rs. 9 per unit). He/She also pays a reduced tariff on the additional 30 units he will be consuming due to change in the slab. Considering the tariff rate as per the new slab will be Rs. 1.45, he will need to pay Rs. 43.50 only. The customer is saving Rs. around Rs. 6,700 by installing solar.

What is gross metering?

Unlike net-metering, the consumer never utilizes the solar power generated as all of the power generated via solar panels is exported to the grid. The consumer has to import all of the power from the grid. Here, 2 different electric meters are used. One calculates the power imported, the other calculates power exported. Also, The rate at which consumers export the power back to the grid is lesser (Decided by DISCOM's) than the rate at which consumers import the power from the grid. And because of this tariff difference, the consumer is only able to lower its electricity bill but getting a ZERO electricity bill is out of the scope.

Let us consider for e.g, a customer is consuming 750 units per month and paying INR 6,750 electricity bill per month at a tariff of Rs. 9 per unit.

In case the customer installs a 6kW On-grid system generating 720units per month With gross metering, the customer still has to pay electricity bill for the total 650 units he consumed as earlier i.e., INR 6750 (70 X 9). DISCOM / Electricity board will pay the customer for 720 units exported at a fixed rate e.g 2,160 (720 X 3). So, the total savings is only Rs. 2,160 Gross Meter is not suitable for solar due to low payout and delays in reimbursement from the utilities for exported electricity.