Solar Energy vs Wind Energy: Which is Better?

Solar Energy vs Wind Energy: Progressive transition from fossil fuels to sustainable alternatives such as wind and solar energy is necessary to achieve the renewable energy targets set by India. In many ways, Solar energy and wind energy are not very different from the source of energy. To elaborate, solar energy naturally comes from the sun, while winds are essentially a result of atmospheric pressure differences caused by the sun's radiation. 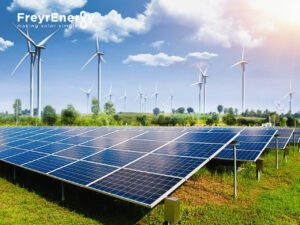 Additionally, no greenhouse gases, such as CO2, are released when energy is generated from sustainable sources. Energy sources such as solar and wind energy are clean forms of energy that we can use in many ways.

But which of these two alternatives is more sustainable and cost-effective? We are often asked this question when comparing new wind turbines with a solar park. In this article, we will go into more detail about this. But let's lift a corner of the veil: while their sources may directly or indirectly be similar, solar panels and windmills are very different, and both have their own sets of advantages.

Let’s break down the advantages of these two renewable sources over the other in detail.

The use of solar energy has seen tremendous growth in the past couple of decades. There are reservations among many that photovoltaic cells require a significant area size to generate sufficient energy. However, , it will take less than 100 ft of shadow-free area to generate 1kW of power.

When compared with wind energy, solar energy offers several obvious advantages, such as:

Wind energy is one of the oldest forms of renewable energy in use. Wind energy has been used for centuries in some parts of Europe, such as the Netherlands.

Aside from the bulky setup and the noise of rotor blades, there are some advantages that wind energy has over solar power.

When it comes to the various renewable sources of energy, it’s safe to say that everyone is a winner compared to fossil fuel energy in both the short and long run. Between solar and wind energies, the answer depends on where they are being utilized.

Solar Energy can operate with practically zero hindrance in places with ample sunlight throughout the year. On the other hand, wind turbines require environments that are almost completely barren of large windbreaks and barrens. This is exactly why most windmills are installed away from urban areas.

Solar Panels are relatively cheaper and come with significantly less maintenance cost compared to wind turbines when it comes to setup costs. Additionally, the role of windmills is limited to utility-scale, while large photovoltaic power stations can even power entire cities or even states. While wind energy is more efficient in energy output, it will not always be as easy to capitalize on as solar energy.