The Future of Rooftop Solar in India

In the last eight years, the Indian solar PV market has grown significantly, from 40 MW to more than 26,000 MW. Rooftop solar PV can help provide energy stability while also allowing for multiple uses of land, which is a limited resource. The Jawaharlal Nehru National Solar Mission (JNNSM) aims to install 100 GW of solar power in the country by 2022, with decentralised and rooftop solar projects accounting for 40 GW. 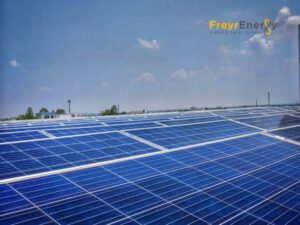 The urban environment offers a considerable amount of empty rooftop space that can be used for solar panel installation. Solar energy systems’ outputs on rooftops are affected by the time of year, location's latitude, weather conditions, roof slope, roof aspect, and shadow from neighboring structures and foliage. Photovoltaic modules, mounting systems, wires, inverters, and other electrical accessories are among the major components of rooftop solar plants. The rooftop solar power plant may either be connected to the local power grid or directly feed the electrical loads. The generated electricity from a grid-connected rooftop photovoltaic power station can often be sold to the servicing electric utility for use elsewhere in the grid. This agreement ensures that the installer's investment is repaid quickly. Because of the revenue generated, many customers from all over the world are moving to this mechanism.

● Cost-Effective: With rooftop solar plants, the power bills will be considerably reduced as there is less need for electricity from the grid. Additionally, power from the grid will become more expensive over time and switching to solar will be more cost-effective. ● Durability: With the life of the system being 25 years, we can expect long-term cost savings from avoiding the cost of expensive electricity from the grid. The system is relatively very low maintenance ● Earn back investment: Users can sell excess solar electricity into the public grid and offset their usage with the same. ● Reduced Fossil Fuel Dependency: Rooftop solar systems help in reducing the dependency on fossil fuel power plants. This reduces carbon emissions and reduces the burden of the transmission and distribution system.

India has committed to generating 30% of its total electricity from renewable energy by 2030 as part of the Paris Agreement. Solar panels on the roof can contribute significantly. Rooftop solar energy generation will also compensate for the severe power shortages in many states. Different states in India have established policies to entice customers and developers to build rooftop solar power plants. Freyr Energy has been certified to provide subsidies for rooftop solar installations on Indian homes. Customers will also get a 20-40% price reduction on rooftop solar systems. So, what are you waiting for? Make the transition to solar energy today.