The first applications of solar energy were for heat. The fire was created by amplifying the sun's rays. In the third century B.C, the Greeks and Romans utilized 'burning mirrors' to light torches for religious activities. Archimedes is claimed to have used the reflecting characteristics of brass to set fire to Roman warships storming Syracuse in the 2nd century B.C. People seek to create cost-effective ways to use sustainable power in a world where non-renewable resources account for most energy production. One of the essential cornerstones of renewable energy technology is the solar panel. 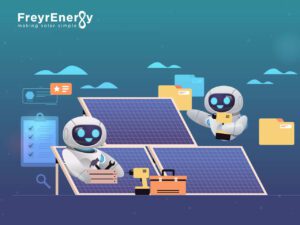 When were solar panels invented?

Alexandre Becquerel's revelation of the photovoltaic effect in 1839 was a significant step forward in solar panel technology. When a material is exposed to light, it produces electricity. In 1888, Aleksandr Stoletov created the first solar cell. In 1955, the first commercially available solar cells were sold. Hoffman Electrics made solar cells that were 10% efficient. Solar panel efficiency improved in the 1970s thanks to efforts from the Solar Power Corporation. Solar energy is one of the most cost-effective solutions for providing power to even remote regions on farms and other agricultural businesses than laying new electric lines.

It is easier to run and manage than diesel generators because it doesn't require fuel or maintenance. The economic evaluation of solar power technology has revealed that it is suited for any region on the planet. Solar energy has progressed significantly over the past decade. However, the next ten years are expected to see unprecedented growth, bolstering solar as a cornerstone for renewable energy adoption.

Scientists have been working on making solar panels more efficient and reliable since the turn of the century. As a result, technology is now more accessible to the general public. Whatever your reasons for being interested in solar power, there is a long and fascinating history behind its rise to prominence. Solar has a wide range of connotations in today's world. It is used in various industries and powers lots of different techniques and devices. Try our SunPro+ app and the Solar Calculator feature to get fast estimates for a solar installation and the energy efficiency you could achieve. Unfortunately, solar PV is on an uphill trajectory to increasing efficiency.

We believe solar technology will be the future. However, mechanical qualities have always constrained PV panels. With nanotechnology, the next generation of solar panels can overcome these obstacles and open up a world of possibilities. We can now employ solar energy in applications where it was previously unviable.