Madhya Pradesh emerging as the hub of Solar Power

In December 2019, New and Renewable Energy Minister, Harsh Yadav recognised Madhya Pradesh as a “Solar State” and Bhopal as the “Solar City”. World Bank has praised the innovations made by the state government for the use of solar energy in the industrial sector.

Rewa Ultra Mega Solar Power project, one of Asia’s largest solar power project was inaugurated by Prime Minister – Mr. Narendra Modi on July 10 2020. The Rewa solar power project consists of three solar power-generating units each having a capacity of 250 MW and each located on a 500-hectare plot of land spreading over a total of 1500 hectares. 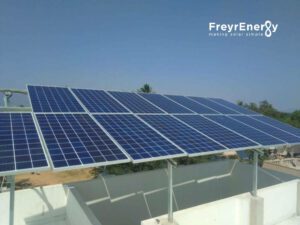 A Financial Advisory Services Agreement has been signed between the New and Renewable Energy Department and International Finance Corporation (IFC) of the World Bank to set up Solar Parks in Shajapur, Agar and Neemuch after the successful establishment of Rewa Solar Project, the biggest solar power project of the country. The Shajapur Solar Park will have 500 M.W.capacity, whereas Agar and Neemuch Solar Parks will have 550 and 450 MW capacity.

Solar rooftop installations in Madhya Pradesh has also seen a huge growth in the last few years. As per the Solar Rooftop Map 2020, by Bridge to India, 313 MW solar rooftop plants have been installed in the state of Madhya Pradesh

To receive the subsidy, home owners need to engage with solar companies in Bhopal who have empanelled with the government. It is mandatory to use made-in-India solar panels to be eligible for subsidy as per the solar subsidy in Madhya Pradesh 2020 guidelines..

As per the government policy of Madhya Pradesh, consumers who install rooftop solar power panel by engaging  the services of a solar company in Bhopal such as Freyr Energy can transfer additional or surplus power to the grid, which will be adjusted in the bill of the concerned consumer. Where the user or the consumer produces more power than he or she consumes during the day, the additional power is injected into the grid and will get reflected as energy credit in the bill and will be passed on to the next month. This facility can be used by installing a 'net-meter' which is a bi-directional meter. These meters will not only record power taken for consumption but also record the power sold or given by the consumers into the system.