A Glossary of Common Terminology used in Solar Industry

A Glossary of Common Terminology used in Solar Industry

If you've been looking to purchase a solar system for your home or business you might have come across some unfamiliar terminologies or industry jargon. This article tries to explain and simplify some such key terminologies in the industry.

So, let us start with what is solar power? Solar power is the conversion of the energy from the sun's radiation into thermal or electrical energy. Solar energy is a clean source of power and choosing Solar has many benefits. It can help you reduce your electricity bill by up to 90%, it has low maintenance and a life of 25 years to name a few. 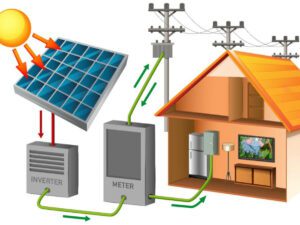 ● Solar Panel Solar panels are used to convert sun rays into electricity. This is done with the help of Solar cells. A solar cell is an electrical device that converts light energy directly into electricity. Electricity is generated when the solar cells are exposed to photons or light particles.

● Inverter An inverter is a type of electrical converter. It is used to convert the variable direct current from solar panel into a utility frequency alternating current. This current can be transferred into an electrical grid or used by a local, off-grid electrical network.

● RMS (remote monitoring system) A solar RMS (Remote Monitoring System) is used to check the performance of the solar power plant remotely. It is crucial to keep track of the solar system's performance. We have integrated the solar RMS from your inverter with our App - SunPro+. This ensures that you can easily track the system performance and you also notified in case of any issues.

● Grid Electricity An electric grid or power grid is used to deliver electricity from producers to consumers. It links the generation, transmission and distribution units.

● CAPEX CAPEX or the capital expenditure model, is a self-funding model for owning a solar plant. The customer has to bear the entire expense of installing and owning the rooftop solar system. The entire payment is usually done upfront.

● Balance Of System (BOS) BoS refers to all the components that are used to install the solar system apart from the photovoltaic panels. It includes inverter, cables/wires, switches, enclosures, fuses, ground fault detectors, etc.

● Load A device or component within an electrical circuit that consumes power is commonly referred to as Load. Electrical appliances in a home or machinery in a factor can be examples of loads. Sometimes the power that is being consumed by the device is also referred to as load.

● On grid Solar System An on-grid solar system is connected to the local utility grid. Excess power from the solar system is sent to the utility grid and the consumers are compensated for the power. A net-meter is placed to capture the export and import of the units of power.

● Hybrid systems Hybrid solar system is a mix of both on-grid and off-grid system. They use hybrid inverters and batteries to store excess energy for later use. Storing energy helps hybrid system operate as a backup power supply even during a power outage.

We have tried to capture the most common terminologies. Do let us know if we have missed out any. Wondering how much you can save by choosing solar? Check out here and send us an enquiry to kickstart your solar journey.