This year's Earth Day theme is "Restore Our Earth." Every year on April 22nd, Earth Day is commemorated. With each passing year, Earth Day becomes more significant as the global climate crisis worsens. Earth Day brings together millions of people by allowing all stakeholders to raise awareness and collaborate on important issues such as global warming, deforestation, and vanishing forest cover, among others. Earthday.org is encouraging people to "be a part of the transition" this year. Embracing solar power could be the key in restoring Earth. 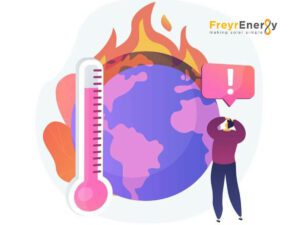 We're up against the most serious environmental threat our species has ever faced. The biggest cause of species extinction this century is likely to be global warming. A 1.5°C average temperature increase could put 20-30% of species at risk of extinction. Many habitats would fail if the world warms by more than 2°C. Many of the world's endangered species live in places where climate change can have a significant impact. Climate change is also occurring at a rate that many animals are unable to adapt to.

Widespread shifts in weather patterns are linked to rising global average temperatures. Extreme weather conditions such as heat waves and massive storms are expected to become more frequent or violent as a result of human-caused climate change, according to scientific reports.

35 of the world's 50 most polluted cities are located in India. The most polluting sources are power plants, industries, and automobiles. The easiest and efficient way to reduce our dependence on fossil fuels is to switch to solar energy and use electric vehicles.

The electric power industry is one of the biggest emitters of greenhouse gases, accounting for 28% of total emissions. Solar energy production is a simple way to reduce our reliance on fossil fuels while also helping to offset global warming by reducing greenhouse gas emissions.

A 3kW solar plant is equal to planting 80 trees every year. This means that we would be able to do more than just produce lights and power the grid as we turn to renewable energy sources. We will help energy-intensive industries achieve carbon neutrality and unleash carbon-free energy. Total carbon neutrality is still a long way off, and it isn't easy, but with the widespread implementation of solar energy, it will become technically feasible in the coming years.

From the initial installation of the panels to the electricity created by PV cells, there are no health risks and no heat-trapping gases are produced. It does not contain carbon dioxide, nor any of the other hazardous pollutants or wastes associated with coal, such as nitrogen oxides, sulfur dioxides, or mercury.

Solar energy systems might be the low-cost solution to this big problem looming over us.. Solar rooftop panels usually have a 25-year life expectancy, making them an excellent investment. Freyr Energy helps you transition to solar seamlessly. Each of our customers are proud of their decision and encourage others to be part of this green revolution.