Why is it necessary to go solar in Amritsar?

Electricity tariff in Punjab are high varying from ₹4.99/kWh to ₹7.30/kWh. With high per capita consumption of 2046 kWh (data from 2018-2019) in the state of Punjab, demand of electricity is continuously rising. Amritsar is no exception in terms of energy usage. Cooling loads in hot summers and heating loads in cool winters leads to a high energy requirement in the city year round. Amritsar has lots of opportunities to transform into a sustainable and smart city. 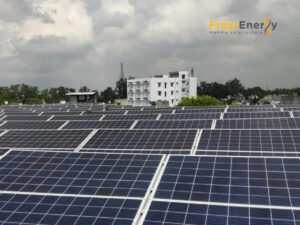 There are already many examples leading the way. A solar cooking system is used to generate steam for langar cooking in Golden Temple, Amritsar. Also, the 11.5MW solar installation at Radha Swami Sect at Beas, Amritsar, is one of the largest rooftop installations in the world.

Now is the best time to go solar for your energy needs as solar assures a fast payback and energy independence in times of high demand and rising energy prices. At Freyr Energy, we have various financing options to help you go solar at minimal upfront cost.

Punjab - The state of five rivers has immense solar potential. Lying on the same geography as Haryana, Punjab experiences 230 to 300 sunny days in a year. That gives enough sunny hours per year for anyone based in the state to generate electricity from solar for all their power needs. The state gets on average 4-7 kWh per square meter of solar energy which is higher than the average.

How solar system is a profitable investment in Punjab?

In Punjab, electricity tariffs have followed an upward trend. According to media reports in January 2021, Punjab State Power Corporation Limited filed a petition with the power of State regulators seeking an 18% increase in electricity tariffs for consumers in the state. We expect the increase will likely be announced in the coming months of April 2021. If this happens, solar will be even more lucrative. The high electricity tariffs make installing solar and generating your own electricity a good investment.

Furthermore, the Solar system takes minimal space as a 1kW system can be installed in 80 sq ft. of shadow-free space and can save up to 80-90% of your electricity bill. The electricity prices from the grid will continuously rise in the future and solar system will generate electricity at the same rate for the next 25 years.

With the knowledge of climate change and the after-effects of greenhouse gases generated by using fossil fuels for energy generation has given an immediate requirement to adapt to more sustainable technologies.

To improve the affordability of Solar, We at Freyr Energy have tied up with NBFCs (Non-banking financial companies) to provide various financing options for you. You can now choose solar without worrying about the high upfront cost. You can get a collateral-free loan with little to no upfront cost and we at Freyr Energy can help you with it. This even becomes more profitable when you can make extra money over your monthly savings of ₹690 from a 3kW system and ₹778 from a 5kW system and more with larger system sizes.

Freyr Energy has already established itself in the Punjab market with 1200 kW of solar systems across Punjab. FreyrEnergy has also solarised 69 police stations across the state.