Why is it Necessary to Go Solar in Haryana?

Haryana is a small agronomic state in India with plenty of sunlight and biomass. A solar power plant produces electricity from sunlight using solar panels. With nearly 330 sunny days in a year, Haryana has absolute potential for solar energy production. To get this potential fully functional and in use, correct incentives and policy support from the Government are extremely important. 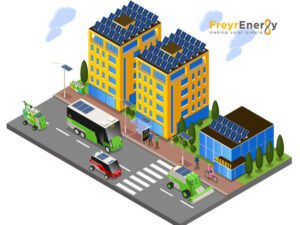 Haryana’s New and Renewable Energy Department (HAREDA) has released the blueprint Haryana Solar Power Policy, 2021, to encourage more people to use solar energy. This initiative has placed a heavy emphasis on rooftop solar projects and small-scale distributed solar, in addition to utility-scale solar projects and parks. Some of the key highlights of the draft policy 2021 include:

1. Solar manufacturing units will have 10% exemption on total applicable tax.

2. DISCOMs will pay for extra-high voltage and high voltage transmission lines up to a distance of 10 kilometers.

3. In addition to DISCOM per unit costs, per unit charges for charging electric vehicles will not exceed Rs 5/kWh.

4. All captive solar projects that have already been approved will be exempt from wheeling and transmission charges.

These policies would be encouraged, and eligible consumers would get facilitated, especially those located in the urban centers of Haryana having constraints like access to adequate rooftop areas or inaccessible rooftops.Through virtual net metering, consumers can own a portion of a communally owned solar power generation system. In conclusion, Solar modules are best installed on slanting rooftops, especially if the slope is south. Because India locates in the northern hemisphere, rooftop solar systems that face south will receive the maximum sunshine. With our hands-on knowledge and experience in this field, Freyr Energy is the only solar rooftop company that uses technology to improve affordability and accessibility for its customers. Our team not only understands solar but is also enthusiastic about environmental transformation and social impact.